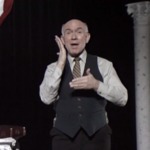 Download Excerpt of the English speech that was translated (.docx) (16 KB)

I want to stress again that human rights are not peripheral to the foreign policy of the United States. Our human rights policy is not a decoration. It is not something we’ve adopted to polish up our image abroad or to put a fresh coat of moral paint on the discredited policies of the past. Our pursuit of human rights is part of a broad effort to use our great power and our tremendous influence in the service of creating a better world, a world in which human beings can live in peace, in freedom, and with their basic needs adequately met. Human rights is the soul of our foreign policy. And I say this with assurance, because human rights is the soul of our sense of nationhood. For the most part, other nations are held together by common racial or ethnic ancestry, or by a common creed or religion, or by ancient attachments to the land that go back for centuries of time. Some nations are held together by the forces, implied forces of a tyrannical government. We are different from all of those, and I believe that we in our country are more fortunate. As a people we come from every country and every corner of the earth. We are of many religions and many creeds. We are of every race, every color, every ethnic and cultural background. We are right to be proud of these things and of the richness that lend to the texture of our national life. But they are not the things which unite us as a single people. What unites us—that makes us Americans—is a common belief in peace, in a free society, and a common devotion to the liberties enshrined in our Constitution. That belief and that devotion are the sources of our sense of national community. Uniquely, ours is a nation founded on an idea of human rights. From our own history we know how powerful that idea can be. Next week marks another human rights anniversary—Bill of Rights Day. Our nation was “conceived in liberty,” in Lincoln’s words, but it has taken nearly two centuries for that liberty to approach maturity. For most of the first half of our history, black Americans were denied even the most basic human rights. For most of the first two-thirds of our history, women were excluded from the political process. Their rights and those of native Americans are still not constitutionally guaranteed and enforced. Even freedom of speech has been threatened periodically throughout our history. Only in the last 10 to 12 years have we achieved what Father Hesburgh has called “the legal abandonment of more than three centuries of apartheid.” And the struggle for full human rights for all Americans—black, brown, and white, male and female, rich and poor, is far from over.

To fully use the Cokely Parallel Corpus (CPC) data provided here, you will need to download and install the latest version of ELAN (this software application is free). You will also need to have access to spreadsheet or database software such as Microsoft Excel, or Google Sheets. The above download links include:

This work is licensed under a Creative Commons Attribution-Noncommercial-Share Alike 4.0 License.