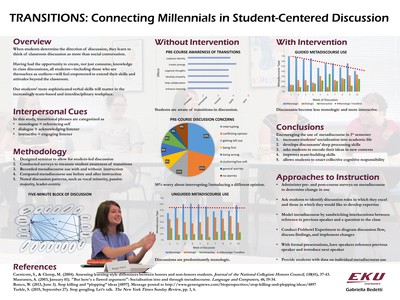 By acquiring rhetorical tools such as discourse markers, commonly called transitions, students improve their listening skills. Without instruction on metadiscourse, discussion is predominantly monologic. With even minimal instruction, students increase their use of dialogic and interactive elements. The use of metadiscourse allows students to gain independence, develop leadership, and enact collective cognitive responsibility.

Discussion-based classes are a defining characteristic of curricula informed by active learning. While a speech course may be included in a general education program, instruction in small-group discussion is less commonly required. In this study, I investigated the metadiscourse in a first-semester discussion course. Metadiscourse is talk about talk, the pragmatic use of language to comment reflexively on discourse itself. The purpose of my research was to identify the metadiscourse used and to determine whether raising the topic of metadiscourse with the participants affected its use in class discussion.

I designated a 2014 class as my control group and a 2015 class as my test group. With the control group, I recorded ten discussions without commenting on my research. With the test group, I also explained that I was investigating the discourse markers they were using to shape their discussion. I catalogued their uses in three categories for spoken academic metadiscourse: monologic, dialogic, and interactive (Mauranen, 2001). The investigation revealed that the control group’s metadiscourse remained unchanged--and predominantly monologic--throughout the ten sessions. The test group, however, introduced dialogic and interactive elements into their discussion, thereby enhancing their self-understanding and empathy toward their peers.