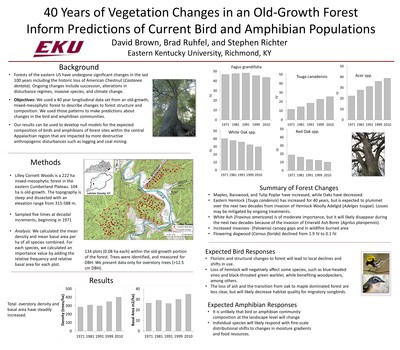 We used a 40 year longitudinal data set from Lilley Cornett Woods, an old-growth forest in Letcher County, KY, to describe changes to forest structure and composition, and to predict changes in bird and amphibian communities. Forest plots (N = 135) were sampled five times at decadal intervals beginning in 1971. We calculated forest community and structural metrics including species importance values, and compared among decades using Bray Curtis dissimilarity values. The forest has undergone significant changes in the last 100 years including the loss of American Chestnut. We found additional significant changes during the last forty years, including the decline of Flowering Dogwood, and the transition in importance from oak to maple species. The importance of Eastern Hemlock has changed little despite an invasive pest, in part because of ongoing treatment efforts. Over the next decade we expect declines in importance of White Ash because of the invasion of Emerald Ash Borer. It is unlikely that bird or amphibian community composition at the landscape level will change; however our data on individual species of birds and amphibians suggest species will respond with fine-scale distributional shifts to changes in moisture gradients and food resources. For example, some species are expected to decline locally, including hemlock associated species such as Blue-headed Vireo. Our results can be used to develop null models for the expected composition of birds and amphibians of forest sites within the central Appalachian region that are impacted by more destructive anthropogenic disturbances such as logging and coal mining.