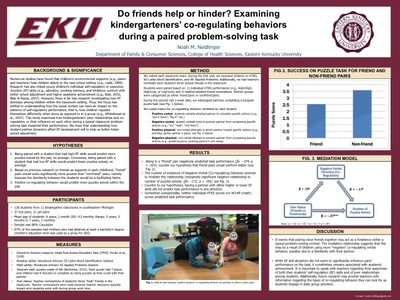 Research has implicated the development as self-regulation skills as one of the most important factors in predicting school adjustment in young children (Rimm-Kaufmann et al., 2009). However, recent studies on the concept of co-regulation in early childhood now examine the ways in which the social context can influence the development of these skills (e.g., Whitebread et al., 2009), particularly with regard to children’s friendships in the classroom. The current study sought to identify specific co-regulating behaviors that impacted the success pairs of kindergarten students in completing a puzzle task, and whether children being paired with a “close friend” led to greater success on the task. The study placed 150 kindergarten children into “friend” and “non-friend” pairs, and videotaped them collaborating to solve a puzzle for eight minutes. Results showed that four primary co-regulating behaviors emerged – 1) verbal facilitating direction, 2) verbal preventative direction, 3) physical facilitating direction, and 4) physical preventative direction. Additionally, children characterized as “non-friends” actually performed better on the task itself, suggesting that children who are more familiar with one another may actually hinder successful collaborations. Implications for teacher strategies (e.g., grouping particular students together) to optimize student development and learning are discussed.