The Effects of Long-term Adapted Aquatics on Swimming with Autism 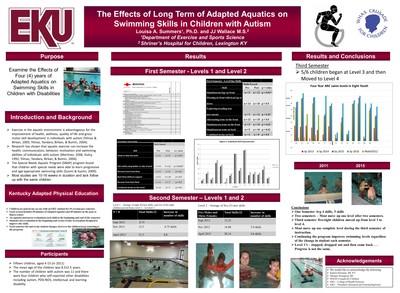 Introduction: Purpose was to determine the effects of four years of adapted aquatics on swimming levels in children with disabilities. Participants: The participants included fifteen children, aged 4-15 years. Eleven children with autism and four children with other disabilities. Procedures: A single subject study design was used to determine the effects of long term adapted aquatics. The American Red Cross (ARC) swimming levels (2005) were used to assess improvement in aquatics. Each child participated in nine sessions of 45 minutes of aquatics and was paired with a new university student each semester. At the beginning of each term, the aquatics director would pre and post-test each child. Intra-rater reliability was performed using an ARC expert instructor and the aquatics director during year one. Intra-rater reliability showed a moderate correlation (r = .74). Results: During the first semester, level one swimmer’s averaged 4 of 22 new skills; level two swimmers learned on average five new skills. During the second semester, five of the eight children in level 2 moved to level 3. Then, during the third semester, five of the same eight children moved from level 3 to level 4. Conclusions and implications: First semester, most children learn 4-5 new skills. After, continuing with the program, children move up one level each semester thereafter. Continuing the adapted aquatics program improved swimming regardless of the change in student assigned. However, the level 1 swimmers who stopped coming and/or, dropped out and then came back, did not progress in the same manner.

We would like to acknowledge the following: J.J. Wallace, MS, Ab.D; Kaitlyn Krizman, BS, PT; Morgan Thompson, BS; WHAS Crusade for Children; and EKU - Department of Exercise and Sport Science, College of Health Sciences, and Presidents Research and Scholarship Fund.