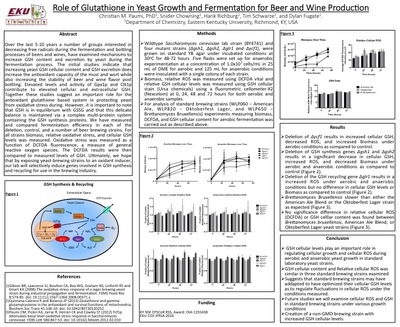 Over the last 5-10 years a number of groups interested in decreasing free radicals during the fermentation and bottling processes of beers and wines, have examined mechanisms to increase GSH content and excretion by yeast during the fermentation process. The initial studies indicate that increasing yeast GSH cellular content and GSH excretion does increase the antioxidant capacity of the must and wort while also increasing the stability of beer and wine flavor post bottling. Elevated levels and activity of Gpx1p and Ctt1p contribute to elevated cellular and extracellular GSH. Together these studies suggest an important role for the antioxidant glutathione based system in protecting yeast from oxidative stress during. However, it is important to note that GSH is in equilibrium with GSSG and that this delicate balance is maintained via a complex multi-protein system containing the GSH synthesis proteins. We have measured and compared fermentation efficiency in each of the deletion, control, and a number of beer brewing strains. For all strains biomass, relative oxidative stress, and cellular GSH levels was measured. Oxidative stress was measured as a function of DCFDA fluorescence, a measure of general reactive oxygen species. The DCFDA results were then compared to measured levels of GSH. Ultimately, we hope that by exposing yeast-brewing strains to an oxidant inducer, our lab will selectively induce genes involved in GSH synthesis and recycling for use in the brewing industry.