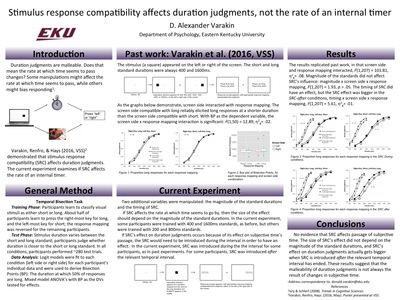 These experiments tested whether human duration judgments can be influenced even when the subjective rate of time is not. In the experiments, human observers made several hundred duration judgments, judging on each trial whether the duration of a visual stimulus was closer to predefined short and long standard durations (e.g. 400ms and1600ms). The stimuli were presented for various durations between the short and long standards on either the left or the right of a computer monitor. In initial experiments, duration judgments were affected by the relationship between the stimulus location and the location of the buttons used to provide judgments. When the right-hand was used to judge that duration was closer to the long standard, stimuli on the right side of the screen elicited long judgments at shorter durations than stimuli on the left side of the screen. The opposite pattern was observed when the left-hand was used to judge that duration was closer to the long standard. This interaction between the stimulus location and response location is an example of stimulus response compatibility (SRC). SRC’s effect on duration judgments is robust, but SRC does not appear to influence the subjective rate of time. If it did, the size of the effect should depend on the magnitude of the short and long standard durations. However, recent experiments suggest that the SRC effect is just as large when the short/long standard durations are 200/800ms and 400/1600ms.