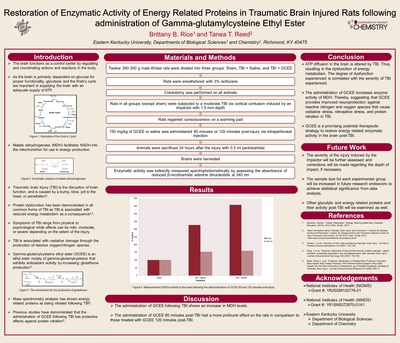 The function of the brain is dependent upon sufficient supply of glucose for energy metabolism. The glycolytic pathway and Kreb’s cycle are important in producing ATP for the brain. Brain dysfunction resulting from an external force is known as traumatic brain injury (TBI). TBI is associated with oxidative damage through the production of reactive oxygen/nitrogen species. Reduced energy metabolism is a consequence of TBI. Antioxidants are substances responsible for the inhibition of oxidation. Gamma-glutamylcysteine ethyl ester (GCEE) is an ethyl ester moiety of gamma-glutamylcysteine that exhibits antioxidant activity by increasing glutathione production. Previous studies have demonstrated that the administration of GCEE following TBI has protective effects against protein nitration. This study investigates the enzymatic activity of malate dehydrogenase which has been identified as being nitrated in moderate TBI. To test the hypothesis that the administration of GCEE will normalize enzymatic activity post-TBI, adult male Wistar rats were divided equally into three groups: Sham, Saline, and GCEE treatment (150 mg/kg). Rats in all groups (except sham) were subjected to a craniotomy and a moderate TBI via cortical contusion. Post-TBI rats in the saline group received an administration of saline (150 mg/kg), and rats in the GCEE treatment group received an administration of GCEE (same dosage). Upon sacrifice, brains were harvested and enzymatic activity was indirectly measured spectrophotometrically. Preliminary data demonstrates that the administration of GCEE post-TBI robustly increases enzymatic activity bolstering the hypothesis. These results indicate potential therapeutic strategies to restore energy related enzymatic activity in the brain post-TBI.