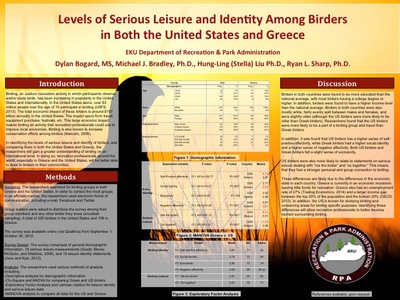 Identity in leisure is related to the core of the participant and their communities in a way that gives meaning to individual experiences (Erikson, 1971). The researchers sought to understand birding identify of birders in both the United States and Greece, and compare birders of the two countries. Using previous instruments, the researchers constructed an online survey via Qualtrics to solicit information related to leisure identify within birding and demographic information.

The researchers identified birding groups in the US and Greece and used snowball sampling. They performed statistical analysis on the collected data. It was found that birders had a higher education and annual salary than the average population. US birders were more likely to be actively involved in birding organizations and travel compared to Greek birders. US birders were found to have higher levels of serious leisure and to have self-positive affectivity. Greek birders have higher levels of social identity and negative affectivity related to birding.

The differences between the two countries is likely related the difference in resources, as Greece is in an economic recession. Improving Greek birding identity and levels of serious leisure could result in a positive impact on the economy and preservation, like in the US.