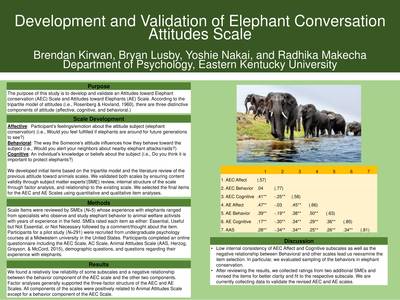 The purpose of this study is to develop and validate an Attitudes toward Elephant conservation (AEC) Scale and Attitudes toward Elephants (AE) Scale. According to the tripartite model of attitudes (i.e., Rosenberg & Hovland, 1960), there are three distinctive components of attitude (affective, cognitive, and behavioral). We developed initial items based on the tripartite model and the literature review of the previous attitude toward animals scales. We validated both scales by ensuring content validity through subject matter experts’ review, internal structure of the scale through factor analysis, and relationship to the existing scale. We selected the final items for the AEC and AE Scales using quantitative and qualitative item analyses. Initial validation data were collected from college students (N = 291) through online questionnaires. We found a relatively low reliability of some subscales and a negative relationship between the behavior component of the AEC scale and the other two components. Factor analyses generally supported the three-factor structure of the AEC and AE Scales. All components of the scales were positively related to Animal Attitudes Scale (Herzog, Grayson, & McCord, 2015) except for a behavior component of the AEC Scale. Sampling of the behaviors in elephant conservation should be evaluated.