The Libet Study: Questioning the Distinction Between Moving and Intending to Move 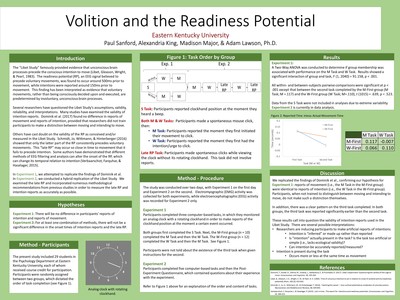 Much research has been dedicated to examining brain processes associated with conscious intention. One line of research has employed the Libet paradigm, in which participants make voluntary hand movements and report the moment of movement initiation or the moment of intention to move (Libet, Gleason, Wright, & Pearl, 1983). While this paradigm has been used in hundreds of studies, several researchers have questioned its assumptions, validity, and reliability. Dominik et al. (2017) provided evidence against the implicit assumption that the intention to move and the movement itself are distinct events. In this study, in which researchers did not train participants to make a distinction between movement and intention, participants’ reports for intention and movement were identical. The current study replicated these findings. Participants (N = 23) were randomly assigned to one of two groups. Both groups performed the same tasks, and the only difference between groups was order of task completion. In both tasks participants made mouse clicks while tracking time via an analog clock. In the M Task participants reported the moment they initiated their click. In the W Task participants reported the moment they had the intention to click. Crucially, participants were not told about the existence of the second task when given instructions for the first. Results showed an interaction of group and task, F(1, 2138) = 79.047, p<.01. Participants, when naïve about their second task, did not distinguish between movement and intention. These findings suggest that the Libet paradigm may not adequately involve and/or measure intention.