An Analysis of the Presence of Invasive Plant Species in Menifee, Powell, and Wolfe Counties of Kentucky. 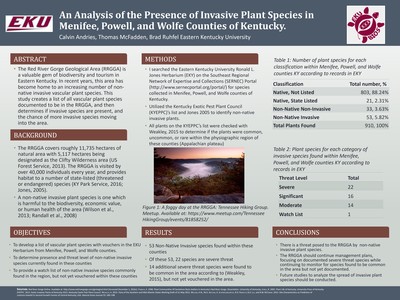 Menifee, Powell, and Wolfe counties of Kentucky encompass the Red River Gorge Geological Area (RRGGA), a vital gem of biodiversity and tourism for Eastern Kentucky. Non-native invasive plant species have negative effects on biodiversity, ecosystem function, and tourism in the RRGGA. To analyze the severity of this threat, a list of vascular plant species with vouchers stored in the Eastern Kentucky University (EKU) Herbarium for these three counties was created by searching the South East Regional Network of Expertise and Collections (SERNEC) portal (www.sernecportal.org). This list was then analyzed using a list of Kentucky’s invasive plant species from the Kentucky Exotic Pest Plant Council (KYEPPC), Weakley’s Flora of the Southern and Mid-Atlantic States, and Jones’s Plant Life of Kentucky. All plants present in the tri-county area were first classified as being native, native-state listed, non-native, or non-native invasive. The non-native invasive plant species were then classified by threat level based on the KYEPPC list, and all severe threat species on the KYEPPC list were analyzed for their likelihood to be in the Appalachian Plateau physiological province (the province the RRGGA falls within). Based on these analyses, it was determined that there are vouchers for 53 invasive plant species within the tri-county area. Of these, 9 are a severe threat and 15 more severe threat species are commonly found within the physiographical province but remain undocumented in the EKU Herbarium.