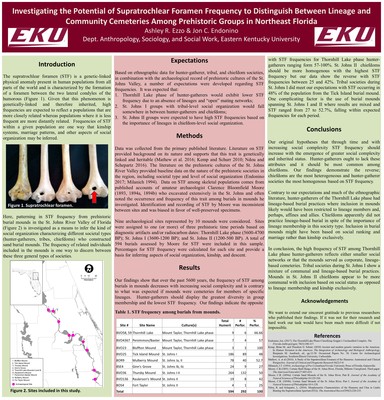 The supratrochlear foramen (STF) is a genetic-linked physical anomaly present in human populations from all parts of the world. This phenomenon is a formation of a foramen between the two lateral condyles of the humorous. Amateur archaeologist Clarence Bloomfield Moore researched the occurrence of this phenomenon among burials from prehistoric mounds on the St. Johns River in Florida. The purpose of this project is to investigate patterning in STF frequency to infer if skeletal populations in prehistoric mounds are closely related indicating lineage-based social organization or more distantly related, indicating communal cemeteries. Our findings suggest that over the 5000 years frequency of STF appears to decrease with increasing social complexity, and inverse relationship from what is expected if mounds were cemeteries for members of specific lineages – hunter-gatherers should display the greatest heterogeneity and lowest STF frequency, chiefdoms should be more homogenous with the highest frequencies of STF. The unexpected and inverse relationship deviates from our hypotheses and expectations and may ultimately be explained as a product of marriage, kinship patterns, and social ranking. Based on the available data we conclude that the high frequency of STF among hunter-gatherers to reflect either smaller social networks or that the mounds served as corporate, lineage-based cemeteries. Later societies, and chiefdoms in particular, where STF is expected to be high if mounds served as corporate cemeteries may instead reflect that inclusion in mounded cemeteries is based on social status and not kinship, explaining the lower frequency of STF compared to earlier groups.

The most interesting facet of this research is that it calls into question beliefs widely held regarding “simple” and “complex” hunting and gathering societies and Native American societies more generally. Hunter-gatherer groups assumed to be simple in fact seem to have been organized into corporate lineages, resembling more complex tribal or chiefdom-level societies. Chiefdom and tribal societies, rather than having exclusive mounded cemeteries for members of lineages, appear to have included people from multiple lineages, reflecting an emphasis on social status more so than lineage membership. This research and mortuary studies more generally have the potential to challenge and correct our unquestioned assumptions regarding human social organization and the evolution of human societies.