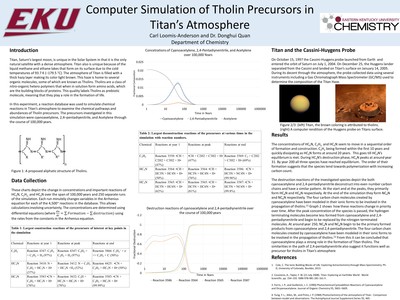 Titan, Saturn’s largest natural satellite, is unique in the Solar System. It is the only moon with a dense atmosphere. This atmosphere is similar to the atmosphere of primordial Earth. It contains a class of chemicals known as tholins, which are organo-nitro polymers that range variably from aliphatic to aromatic in nature. Studies have shown that Tholins, while in solution with nitric acid easily form amino acids. This suggest that they may have played a role in the origin of life on Earth. Here in this work we investigate precursors to Tholins via a computer simulation to further understand the Tholin formation. The compounds investigated in this work are cyanoacetylene, 2,4-pentadiynenitrile, and acetylene. The computer simulation was based on a gas phase reaction database. Calculations were run to compute dipole moments, abundances, and rate constants of reaction over time. The investigated chemicals were found to have an active role in Tholin formation and insight into possible reaction pathways have been found.