Chica Traducida: Subalternity and Cultural Erasure in the Translation of The House on Mango Street 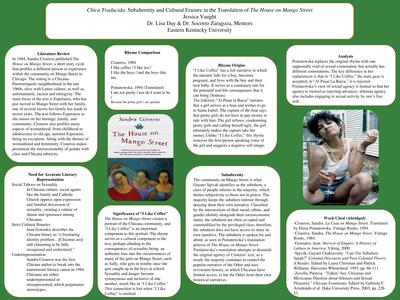 In 1984, Sandra Cisneros published The House on Mango Street, a short story cyclethat provides 44 vignettes taking place within the community on Mango Street, a Chicano-Puertorriqueño barrio in Chicago. The book is often called a “coming-of-age” text, but each vignette tells a different person’s experiences, with several recurrent characters, including Esperanza (the narrator), her family, and her neighbors on Mango Street. In the 1994 Spanish translation of the novel, translator Elena Poniatowska uses poetic license in one vignette of the novel in particular, completely changing the passage’s message about sexuality and adolescence. By revising the passage in her translation, Poniatowska erases critical components of Chicana culture when Chicanas already both lack a prominent place in mainstream literary canon and struggle with liminality within their personal identities. While Cisneros claims her own subjectivity as a Chicana writer in writing vignettes through which her characters can also achieve subjectivity, Poniatowska erases Cisneros’ effort to create space and exercise agency by co-opting the text through her own poetic license in the translation process.