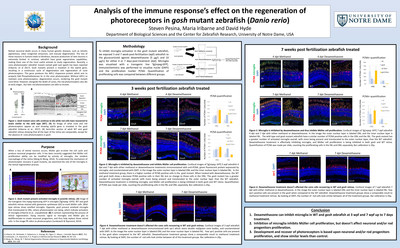 Recently, a cone-blind photoreceptor zebrafish mutant named gold rush (gosh) was reported (Iribarne, et al 2017), and it has been suggested that Müller cell proliferation can be modified by the activity of microglia in the retina (Wang & Wong, 2014). To understand this mechanism of photoreceptor recovery, we examined the role of the microglia in gosh retinal regeneration. Dexamethasone was used to inhibit microglia activation for either 4 or 7 days-post-treatment (dpt). Macrophage/microglia were visualized with a transgenic line Tg[mpeg:GFP]. Immunochemistry was performed to visualize nuclei (DAPI) and the proliferation marker PCNA, or double cone by zpr1.

In the methanol treatment group, gosh mutants have a greater number of activated microglia, with more being present and translocated to the outer nuclear layer (ONL) than WT. PCNA positive cells are present in Müller cell, and neuronal progenitors in the inner nuclear layer (INL), and rod precursors in the ONL. gosh mutants showed higher numbers of PCNA positive cells compared to WT. When treated with dexamethasone, WT and gosh showed similar microglia features as not active. WT and gosh showed a decrease in PCNA positive cells in their INL but no change to those in the ONL.

The WT retina showed a normal appearance with a long, slim cone body cell. goshshowed a discontinuous cone layer with abnormal cones; between the two treatment groups of the same type of fish, no difference was seen. The number of rod cells looked similar between all treatment groups.