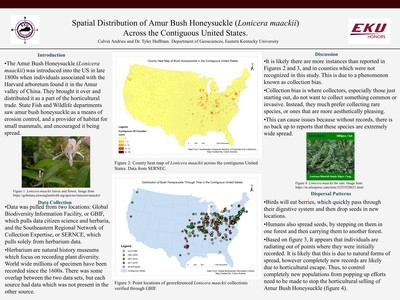 This project investigates the ability to map distribution patterns of invasive plant species by focusing on the Amur bush honeysuckle, Lonicera maackii, which is the most common bush honeysuckle species found in Kentucky. It was introduced to the U.S. through the Harvard Arboretum in the 19th century, and since then has become a problematic invasive in many states. This project looks at records of Amur bush honeysuckle in the contiguous U.S. reported through citizen science observations, and by natural history collections to gather historical record data for Amer bush honeysuckle. Then, utilizes ArcGIS to map this data and display temporal distribution patterns. This project also investigated collection bias, and the issues which it can cause for the historical documentation of invasive species.