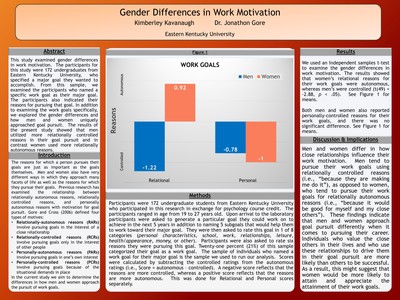 This study examined gender differences in work motivation. The participants for this study were 172 undergraduates from Eastern Kentucky University, who specified a major goal they wanted to accomplish. From this sample, we examined the participants who named a specific work goal as their major goal. The participants also indicated their reasons for pursuing that goal. In addition to examining the work goals specifically, we explored the gender differences and how men and women uniquely approached goal pursuit. The results of the present study showed that men utilized more relationally controlled reasons in their goal pursuit and in contrast women used more relationally autonomous reasons.