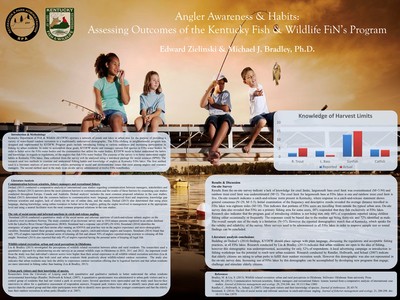 Kentucky Department of Fish & Wildlife (KYDFW) operates ponds and lakes in urban areas to provide a variety of water-based outdoor recreation to a traditionally underserved demographic. In order to better serve the FiNs water bodies and the communities that utilize the water bodies, KYDFW needs to better understand the habits and knowledge, in regards to regulations, of the anglers that fish FiNs water bodies.

Results from the on-site survey indicate a lack of knowledge for creel limits; largemouth bass creel limit was overestimated (M=3.94) and rainbow trout creel limit was underestimated (M=2). The creel limit for largemouth bass at FiNs lakes is one and rainbow trout creel limit is five. On-site research indicates a catch-and-release norm present in Kentucky, where response to a catch-and-release statement shows general consensus (N=29, M=3.5).The average distance travelled to FiNs lakes was eighteen miles (M=18), indicating portions of FiNs users are travelling from outside the urban area. On-site survey data also revealed that FiNs are a primary fishing area for some users, 48% responded that they fish exclusively at FiNs lakes. Research indicates introducing children is not reaching its goal, only 48% of respondents reported taking children fishing.

The overall sample size of the study is a limitation (N=37). However the reported demographics match that of Kentucky, which speaks for the validity and reliability of the survey. More surveys need to be administered to all FiNs lakes in order to improve sample size so sound findings can be concluded.