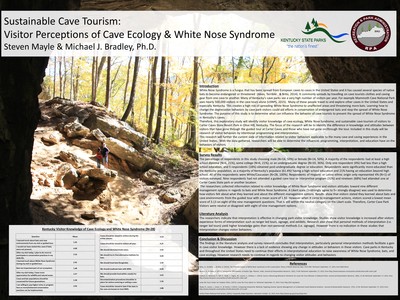 White Nose Syndrome is a fungus that has been spread from European caves to caves in the United States and it has caused several species of native bats to become endangered or threatened. Many of Kentucky’s cave parks see a very high number of visitors per year. Many of these people travel to and explore other caves, creating a high risk of spreading White Nose Syndrome to unaffected areas and threatening more bats. Learning how to change the depreciative behaviors by cave park visitors could aid efforts in conservation of endangered bats and stop the spread of White Nose Syndrome. The purpose of this study is to determine what can influence the behavior of cave tourists to prevent the spread of White Nose Syndrome in Kentucky’s caves.

The focus of the research will be to identify the difference in knowledge and attitudes of visitors to Carter Caves. Results show that visitors stated they learned about bats and cave environments from the guided tour, however when it came to management actions, visitors were neutral or disagreed with eight of nine management options.

Researchers concludes that personal interpretation methods facilitate a gain in cave visitor knowledge. However there is a lack of evidence showing any change in attitudes or behaviors in these visitors. Cave parks in Kentucky and throughout the United States need to continue their efforts in interpretational education to raise awareness of White Nose Syndrome, bats, and cave ecology.