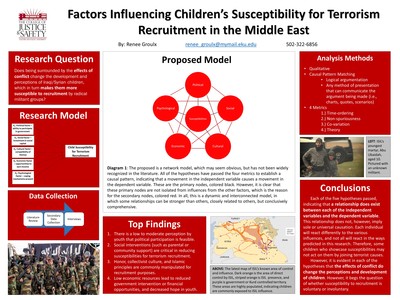 Islamic State of Iraq and the Levant (ISIL) has become a notable force in the Middle East in the twenty-first century. ISIL’s tactics and methods are under scrutiny – particularly the unique aptitude of the organization at recruitment. This recruitment has gone global, surpassing territorial boundaries, but also transcending generational gaps. This research addresses the recruitment of children in the Middle East to terrorist groups such as ISIL, specifically in regards to their possibly altered perceptions/development due to conflict. Five hypotheses were tested, evaluating the relationships of five factors that could influence children’s susceptibilities to terrorism. These five hypotheses included political, social, cultural, economic, and psychological factors. Each of the five hypotheses passed the three objectives of causal pattern matching, indicating that a relationship does exist between each of the factors assessed and the children’s susceptibility to terrorism. These relationships do not, however, imply sole or universal causation. Therefore, some children who present susceptibilities may not act on them by joining terrorist causes. It is evident in each of the hypotheses that the effects of conflict do change the perceptions and development of children. The revised model being proposed is a network model, where primary nodes are not isolated from influences from the other factors, which is the reason for the secondary nodes. In all, this is a dynamic and interconnected model, in which some relationships can be stronger than others, closely related to others, but conclusively comprehensive.