Characters of Blood: Black Heroism in the Transatlantic Imagination 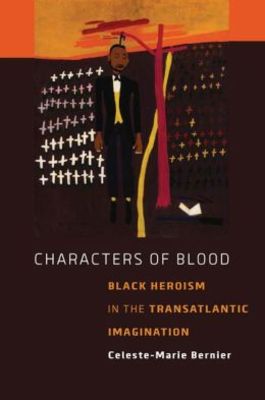 Across the centuries, the acts and arts of black heroism have inspired a provocative, experimental, and self-reflexive intellectual, political, and aesthetic tradition. In Characters of Blood, Celeste-Marie Bernier illuminates the ways in which six iconic men and women—Toussaint Louverture, Nathaniel Turner, Sengbe Pieh, Sojourner Truth, Frederick Douglass, and Harriet Tubman—challenged the dominant conceptualizations of their histories and played a key role in the construction of an alternative visual and textual archive.

While these figures have survived as symbolic touchstones, Bernier contends that scholars have yet to do justice to their complex bodies of work or their multifaceted lives. Adopting a comparative and transatlantic approach to her subjects’ remarkable life stories, the author analyzes a wealth of creative work—from literature, drama, and art to public monuments, religious tracts, and historical narratives—to show how it represents enslaved heroism throughout the United States, Africa, and the Caribbean. In mapping this black diasporic tradition of resistance, Bernier intends not only to reveal the limitations and distortions on record but also to complicate the definitions of black heroism that have been restricted by ideological boundaries between heroic and anti-heroic sites and sights of struggle.