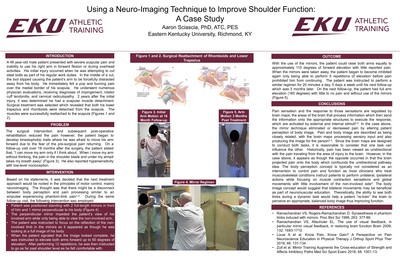 A 46 year-old male patient presented with severe scapular pain and inability to use his right arm in forward flexion or during overhead activities. An evaluation by an orthopedic surgeon who specialized in scapular conditions determined he had detachment of various scapular muscles. Surgical reattachment of the lower trapezius and rhomboids was performed. The surgical intervention and post-operative rehabilitation reduced the pain however; 18 months following surgery, the patient developed kinesiophobic traits and hypersensitivity with low-level nocioception. In an attempt to alleviate the pain and fear of movement, neuroimaging was utilized by employing a mirror-box regimen. The patient was instructed to focus on the reflection of the non-involved limb in the mirrors so it appeared as though he was looking at a full image of his body. When the patient signaled that the image looked complete, he was instructed to elevate both arms to numerous angles for approximately 20-30 repetitions.