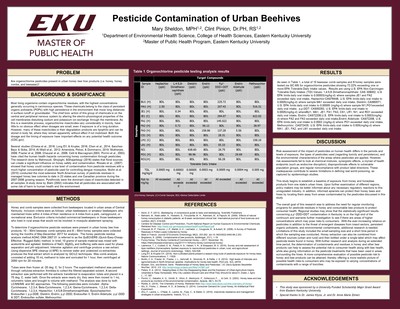 Humans have used honey as a food source and in numerous ancient cultures as a remedy for many illnesses for more than 8,000 years. In today’s markets, local and specialty honeys are trending as an immensely popular natural nutritional product. Honey is perceived as a healthy alternative free from side effects that plague synthetic chemical sweeteners and medicines. In addition, the US shipped more than four million kilograms internationally in 2017. However, during foraging, honey bees can bring many pollutants into the hive, including pesticides. These pesticide residues in honey are becoming a growing concern because of both potential human health effects and negative effects on the hives. Urban beehives from city apiaries may be subject to increased pesticide use from spraying of commercial, park, and residential locations. Urban produced honey and beeswax were collected and tested for pyrethroid pesticide residues, organochlorine pesticides, and heavy metals. Though results showed no detectable levels of pyrethroid pesticides, organochlorines pesticides such as DDT and Endosulfan were present, both of which persist in the environment since being banned in 1972 and 2010, respectively. Seventy two percent of honey samples tested in this study exhibited levels of pesticides exceeding EPA tolerable daily intake levels