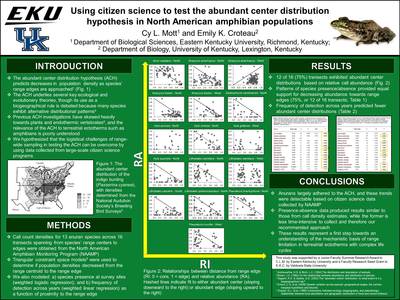 The abundant center distribution hypothesis predicts that population density decreases as the geographic range edge is approached, a pattern that forms the basis for inferences regarding spatial variation in species’ ecology, evolution, conservation, and management. However, the extent to which abundant center distributions represent a biogeographical rule is dubious, as such patterns occur in less than half of all species examined. In addition, population sampling across the entirety of species’ ranges is rarely feasible without large-scale coordinated efforts typical of citizen science programs. To determine if an abundant center distribution occurs among ectothermic vertebrates, we examined range-wide abundance data for 13 species of amphibians occurring throughout central and eastern North America. Using breeding call count data from the North American Amphibian Monitoring Program, we assessed the presence and/or extent of declines in population density as the geographic range edge is approached using three common estimates of abundance. Most focal species exhibited some form of abundant center distribution, although results were dependent upon the specific abundance estimate employed. Our results represent some of the most comprehensive data on range-wide variation in abundance among the world’s most imperiled vertebrate group, and these data speak to the value of citizen science programs in providing abundance data for conservation and management.