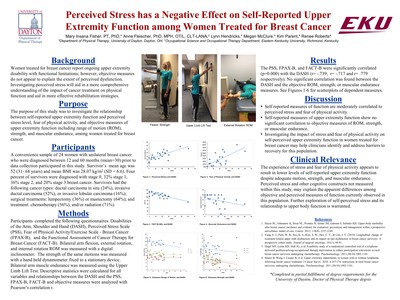 Research Objectives Women treated for breast cancer report ongoing disability in their involved upper extremity, however, often objective measures do not appear to explain the level of perceived dysfunction. The purpose of this study was to investigate the relationship between perceived stress levels, fear of physical activity and self-reported upper extremity function among women treated for breast cancer.

Participants 25 women with a mean age of 52 year (range 31-68) diagnosed with Stage 1-3 breast cancer between 12 and 60 months prior to data collection completed 3 patient-reported outcome scales in a single visit. Data were analyzed with Pearson’s correlation r to determine if there was a relationship between self-reported upper extremity function and/or perceived stress level and fear of physical activity.

Results: There was a significant relationship between the DASH and both the PSS , r=.074, p (one-tailed)

Conclusions: Results of the study suggest that there is a significant positive relationship between the DASH and both the PSS and FPAX-B among women treated for breast cancer. Perceived stress and fear of physical activity may be impacting self-reported upper extremity functional abilities.