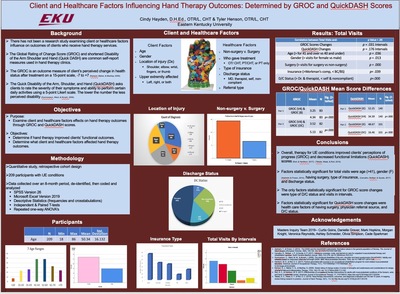 A quantitative study was conducted with clients who received hand therapy treatment in an orthopedic outpatient clinic. During an 18-month period, data was collected from a convenience sample of 200+ participants with upper extremity conditions. The Global Rate of Change Score (GROC) was used to measure client reported improvements after treatment. The QuickDASH is an 11 item questionnaire used to measure physical function and symptoms in people with musculoskeletal disorders in the upper limb. Data was deidentified, coded, and analyzed using statistical methods in SPSS version 26. Paired t-tests were used to compare GROC and QDash scores at timed intervals. Repeated one-way ANOVA’s were conducted to examine the relationships between client and healthcare factors and outcomesThe study findings are summarized. The majority of clients received 1-15 hand therapy visits. Clients with shoulder, wrist, and finger injuries were more predominant than elbow and thumb injuries. Working age adults were seen most frequently for upper extremity conditions, with those 40 and over receiving therapy twice as often as those under 40. Eighty percent of men received surgery, compared to 33% of women. Females were more likely to adhere to therapy and have more therapy visits. Those clients with third party insurance improved QuickDASH scores more than those with Medicaid or Medicare. Using two-tailed t-tests, GROC and QuickDash score increases were statistically significant for all time comparisons. On a percentage scale of 0-100, QuickDASH scores increased significantly with an average of 32.29%, twice the change of clinical significance. Although there were no significant relationships found for client or health care factors in improving GROC scores, the health care factors of having surgery, who the therapist was, (OT, PT, CHT), type of insurance, and total visits were statistically significant for QuickDASH score improvements.