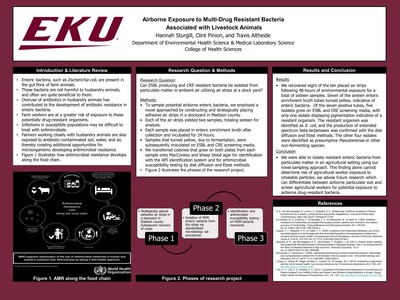 Background: Our research examines occupational exposures to antimicrobial resistant bacteria found in airborne agricultural particulate matter in central Kentucky. Currently there is a lack of existing studies examining our topic in central Kentucky. The issue of anti-microbial resistance, particularly among gram negative enteric bacteria, in agricultural settings has been documented in literature and continues to be a growing public health concern. Among the Enterobacteriaceae family, the presence of extended spectrum beta-lactamase (ESBL) producing and carbapenem resistant (CR) bacteria are especially concerning due to the impact they have on healthcare worldwide.

Methods: To sample potential airborne enteric bacteria, we employed a novel approached by constructing and strategically placing adhesive air strips in a stockyard in Madison county. Each of the air strips yielded two samples, totaling sixteen for analysis. Each sample was placed in enteric enrichment broth after collection and incubated for 24 hours. Samples that turned yellow, due to fermentation, were subsequently inoculated on ESBL and CRE screening media. We transferred colonies that grew on both plates from each sample onto MacConkey and sheep blood agar to use for further testing with the API identification system and antimicrobial susceptibility by disk diffusion method.

Results: We recovered eight of the ten placed air strips following 48-hours of environmental exposure for a total of sixteen samples. Seven of the sixteen enteric enrichment broth tubes turned yellow, indicative of enteric bacteria. Of the seven positive tubes, five isolates grew on ESBL and CRE screening media, with only one isolate displaying pigmentation indicative of a resistant organism. The resistant organism was identified as E. coli, and the production of extended spectrum beta-lactamases was confirmed with the disk diffusion and Etest methods. The other four were identified as presumptive Pseudomonas or other non-fermenting species.

Conclusions: We were able to isolate resistant enteric bacteria from particulate matter in an agricultural setting using our novel sampling approach. This finding alone cannot determine agricultural worker exposure to inhalable particles; this is why we advise future research which can differentiate between airborne particulate size.