From Hereditary Authority to Representative Government: Leadership and the Politics of Inclusion in Colonial Mbano 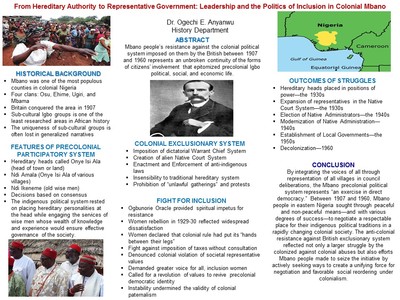 By integrating the voices of all through representation of all villages in council deliberations, the Mbano precolonial political system represents “an exercise in direct democracy.” Between 1907 and 1960, Mbano people in eastern Nigeria sought through peaceful and non-peaceful means—and with various degrees of success—to negotiate a respectable place for their indigenous political traditions in a rapidly changing colonial society. The anti-colonial resistance against British exclusionary system reflected not only a larger struggle by the colonized against colonial abuses but also efforts Mbano people made to seize the initiative by actively seeking ways to create a unifying force for negotiation and favorable social reordering under colonialism.