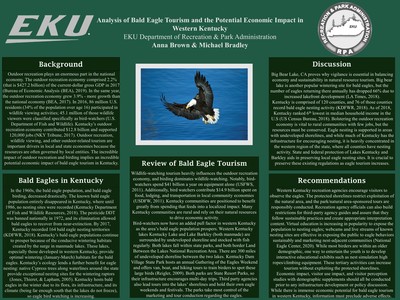 Historically, Kentucky was not the state to which travelers flocked to find bald eagles as there were no areas of known nesting activity (Monroe and Mengel, 1941). After the United States banned the pesticide DDT in 1972, though, and the development of infrastructure leading to the Kentucky Lake and Lake Barkley (in western Kentucky), the altered aquatic environment, and the native cypress trees surrounding the water, forged an ideal area for bald eagle wintering (Kentucky Department of Fish and Wildlife Resources (KDFWR), 2014). From 1986 to 2010, there was a positive trend in bald eagle sightings and tracking across the state (Eakle, Bond, Fuller, Fischer, & Steenhoff, 2015). Now, all counties in western Kentucky have known bald eagle nesting activity (KDFWR, 2017). The Outdoor Industry Association estimated that $12.8 billion of the economic impact of tourism in Kentucky in 2016 came from outdoor recreation participation (NKY Tribune, 2017). Considering the prominence of outdoor recreation’s economic impact in Kentucky, it is crucial to explore the economic impact of bald eagle tourism. Bald eagles were threatened in the 20th century, so it is crucial to continue to limit the use of pesticides, monitor fish levels, and maintain the appropriate forested areas to continue fostering a conducive wintering environment for bald eagles. Known bald eagle nesting sites in Kentucky are primarily in protected areas (i.e. State Parks, National Recreation Areas, National Forests), so the state has the ideal infrastructure to responsibly increase bald eagle tourism without exploitation. The infrastructure to support the raptors is already present, so parks and forests need to work with communities to provide interpretation, equipment, and improve the prominence of specialized bird tours during the winter season. The purpose of this research project is to explore the current state of bald eagle tourism in Kentucky and to assess the potential economic impact of this outdoor activity on its community.