Cumberland Falls: The Future of Economic Success for Southern Kentucky 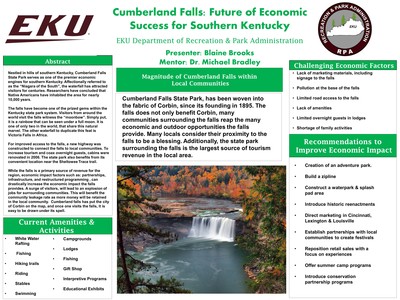 Nestled in hills of southern Kentucky, Cumberland Falls State Park serves as one of the premier economic engines for southern Kentucky. Affectionally referred to as the “Niagara of the South”, the waterfall has been attracting visitors for centuries. Researchers have concluded that Native Americans have inhabited the area for nearly 10,000 years. The falls has become one of the prized gems within the Kentucky State Park system. The falls is a true Kentucky treasure, due to a phenomenon called the “moonbow”. In layman’s terms, it is a rainbow that can be seen under a full moon. The falls is one of only two in the world, that share this natural marvel. The other waterfall to duplicate this feat is Victoria Falls in Africa. For improved access to the falls, in 1931, a new highway was connected from the falls to nearby Corbin. Additionally, to increase tourism and coax overnight guests, cabins at the state park were renovated in 2006. While the Sheltowee Trace Trail does extend near the falls, the area would alter drastically if the falls was nonexistent. The discovery of the falls set up Corbin as key location to conduct business, specifically within the logistics sector. While this is great business, this would not attract many tourists. It can be argued, Cumberland Falls State Park, established many public and private sector jobs in Corbin and the local area. The falls has put the city of Corbin on the map, and once one visits the falls, it is easy to be drawn under its spell.