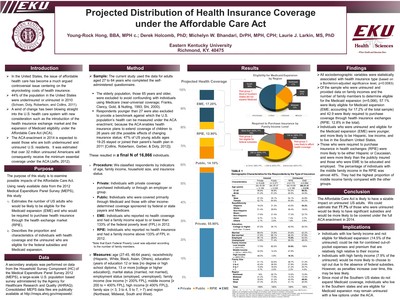 A wind of change has been blowing straight into the U.S. health care system with new consideration such as the introduction of the health insurance exchange market and the expansion of Medicaid eligibility under the Affordable Care Act (ACA). In order to examine possible impacts of the ACA, this study estimates the number of US adults who would be likely to be eligible for the Medicaid expansion (EME; n=2,133) and who would be required to purchase health insurance through the health exchange market (RPIE; n=2,863). Using newly available data from the 2012 Medical Expenditure Panel Survey (MEPS), we classified respondents by indicators of age, family income, household size, and insurance status. We found that 17.2% of US adults ages 27-64 were EME and 12.9% were RPIE in 2012. Of those RPIE, 18.3% were identified as required to have coverage through the insurance exchanges without federal subsidies. Compared with adults with private or publicly funded coverage, those who were uninsured and eligible for the Medicaid expansion were younger, and more likely to be Hispanic, low income, and to live in the Southern United States. The results indicate that over half of those RPIE fall into either family incomes between 133% and 199% of the federal poverty level (FPL) or above 400% FPL, and these individuals may be at risk of remaining uninsured. The Affordable Care Act is likely to have a sizable impact on uninsured US adults. We could estimate that 51% of those who were uninsured would be likely to have significant subsidies and would be more likely to be covered under the full ACA enactment in 2014.