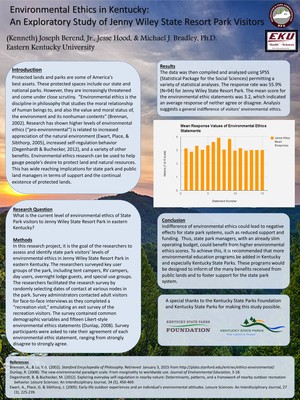 Master of Science Degree in Recreation and Park Administration

Protected lands and parks are some of America's best assets. However, they are increasingly threatened due to budget and other constraints. Environmental ethics can be used to help gauge people's desire to protect land and natural resources. “Environmental ethics is the discipline in philosophy that studies the moral relationship of human beings to, and also the value and moral status of, the environment and its nonhuman contents” (Brennan, 2002). This has wide reaching implications for state park and public land managers in terms of support and the continual existence of protected lands.

The goal of the researchers in this study is to assess and identify state park visitors’ levels of environmental ethics in Jenny Wiley State Resort Park in eastern Kentucky. Surveys that contained common demographic variables and fifteen Likert-style environmental ethics statements (Dunlap, 2008) were administered, and survey participants were asked to rate their agreement of each environmental ethic statement, ranging from strongly disagree to strongly agree.

The response rate was 55.9% (N=94) for Jenny Wiley State Resort Park. The mean score for the environmental ethic statements was 3.2, which indicated an average response of neither agree nor disagree. Analysis suggests a general indifference of visitors’ environmental ethics.