Summer Camps: The Benefits for Youth 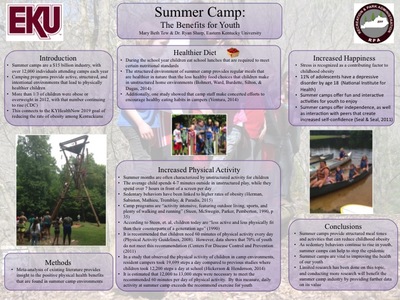 Childhood obesity has become increasingly more apparent in today’s society, as well as social disorders, such as depression and anxiety. The National Institute for Mental Health reported that 11% of adolescents have a depressive disorder by age 18. According to the CDC, more than one third of adolescents were overweight/obese in 2012, with that percentage rising. The National Wildlife Federation reported that the average child spends less than 30 minutes outside in unstructured play, while they spend over 7 hours daily in front of a screen. With these critically high rates of unhealthiness, parents are searching for an outlet to allow their children to become healthier, mentally and physically, while still having fun.

Research was completed through a meta-analysis of current scholarly journal articles-including articles that focused on the many factors of summer camp that promote healthier youth. It was found that summer camps allow kids to get physical exercise through fun activities, while having positive interactions with their peers to promote self-confidence and self-esteem (Ventura, 2013). Summer camps also limit the amount of free range snacking that can occur, while spending the summer at home on the couch. Structured meal and snack times accompanied with increased physical activity, leads to increased physical health and lower body weight (Zarrett, 2013)

Summer camps positively affect youth through increased physical activity, structured meal times, and increased positive social interactions with their peers (Zarrett, 2013). The increase of research on summer camps is needed so recreation professionals can adapt the activities that take place to accomplish the goals wanted for youth during these camps.