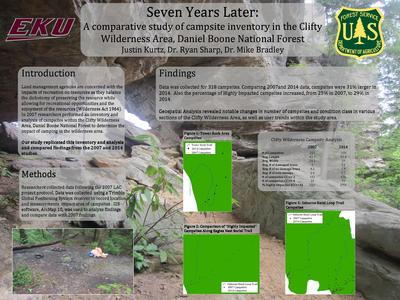 Purpose of the Project

This 2014 Limits of Acceptable Change comparative study was performed in the Clifty Wilderness Area of the Daniel Boone National Forest to identify campsite locations and measure campsite conditions within the management area since 2007.

Researchers collected data using the 2007 LAC project protocol and a Trimble Global Positioning System receiver to collect location and measurements of campsites and impact area. GIS software, ArcMap 10, was used to analyze findings and compare data from both studies.

Researchers discovered 318 campsites, a significant increase compared to the 222 discovered campsites in 2007. Comparing 2007and 2014 data, campsites were 31% larger and the percentage of Highly Impacted campsites increased, from 25% in 2007, to 29% in 2014. Geospatial Analysis revealed notable changes in number of campsites and condition class in various sections of the Clifty Wilderness Area, as well as user trends within the study area.

As a comparative study managers can see the effects of recreation patterns over time. The USDA Forest Service can directly use this study to inform decisions about forest and recreation management in the study area.