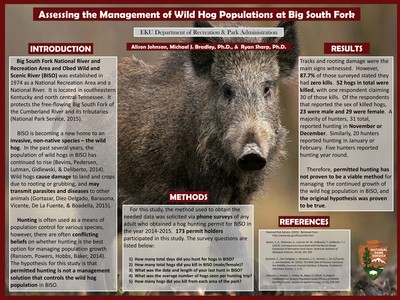 Big South Fork National River and Recreation Area and Obed Wild and Scenic River (BISO), located in Kentucky and Tennessee, was established in 1974 as a National Recreation Area and River. BISO is becoming home to the wild hog, an invasive, non-native species. The hog population has continued to rise, causing damage to the land due to rooting and grubbing. Hunting is often used as a means of population control, however, there are often conflicting beliefs on whether hunting is the best option for managing hog population.

Through the years, hunting became the most used method of controlling the increasing number of wild hogs that were menacing the land. However, hunting did not seem to be controlling the population increase to a level that made a significant impact. Therefore, other methods of population control were studied, including the use of fertility control agents, toxic baits, and a combination of baiting with oral contraceptives and hunting. Results of this study showed there were numerous signs wild hogs were in BISO, however, not many hogs killed during the hunting season.

Using the information from this study, there continues to be evidence of wild hogs in BISO, and more research is needed regarding proper ways to handle the population of wild hogs. Permitted hunting has not proven to be a viable method for managing the growth of the wild hog population in BISO.