The Effects of Race on Spatial Perspective Taking 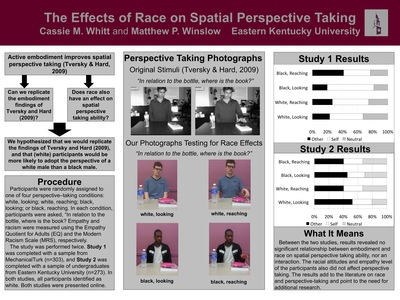 This work investigates the effect of race on spatial perspective taking in two studies, one using participants recruited on Amazon’s MechanicalTurk and another at Eastern Kentucky University. Spatial perspective taking ability was measured through the use of photographs featuring black and white males in different poses of embodiment, in an attempt to partially replicate the Tversky and Hard (2009). Racism and empathy were measured using the Modern Racism Scale (MRS) and the Empathy Quotient for Adults (EQ), respectively. Between the two studies, results revealed no significant relationship between embodiment and race on spatial perspective taking ability, nor an interaction. The racial attitudes and empathy level of the participants also did not affect perspective taking. The results of the study are important in examining the relationship between race and perspective-taking ability point to the need for additional research.