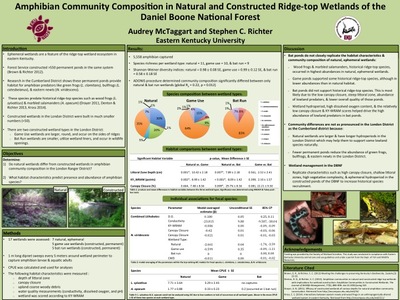 Ephemeral wetlands are a natural feature of the ridge-top ecosystem in the Daniel Boone National Forest (DBNF) in eastern Kentucky, and support a diverse amphibian assemblage characterized by species with short larval periods. However, hundreds of hydrologically permanent ponds have been constructed along the ridge-top system in the last 50 years. The results of previous studies suggest that constructed ponds act as sinks for historical ridge-top species because they provide habitat for amphibian predators with long larval periods or aquatic adult stages. My objective was to further elucidate the impact of constructed ponds on the ridge-top ecosystem in an area of the DBNF where construction methods, wetland density, and wetland placement differ from those in previous studies. Seven natural wetlands, five game wetlands, and five bat runs were surveyed for amphibian larvae and habitat characteristics. Natural wetlands scored higher on the KY-WRAM and had shallower littoral zones than both constructed wetland types. They also had greater canopy closure than bat wetlands. Using ADONIS, I found that natural wetland communities differed from those in bat wetlands (R2 = 0.24, p = 0.016) and, although species richness was similar between natural and game wetlands, the relative species abundances observed between wetland types differed. These results suggest that construction methods used in the London District are not conducive to recruitment and persistence of historical ridge-top species. Modifying constructed wetlands to replicate natural features such as hydroperiod, littoral zone depth, and vegetation would increase the recruitment of species characteristic of the ridge-top system.