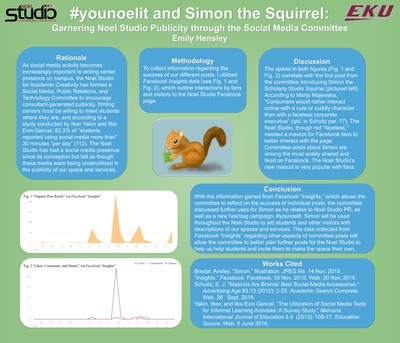 As social media activity becomes increasingly important to writing center presence on campus, the Noel Studio for Academic Creativity has formed a Social Media Committee to encourage consultant-generated publicity. Writing centers (WCs) must be willing to meet students where they are, and according to a study conducted by Ilker Yakin and Ilke Evin Gencel, 82.2% of “students reported using social media more than” 30 minutes “per day” (112). The Noel Studio has had a social media presence since its conception but felt as though these media were being underutilized in the publicity of our space and services. The purpose of this study, conducted through the collection of social media analytics, is to evaluate whether the committee-generated posts have encouraged interaction. With this poster, I will illustrate the research and decisions that led to the creation of the Noel Studio's Social Media, Public Relations, and Technology Committee, our committee-created mascot, Simon the Scholarly Studio Squirrel, and our new hashtag campaign, #younoelit. Our initial committee-planned post reached 95% more people than previous posts on Facebook, and the percentage of students reached has continued as such with subsequent committee posting. Our poster will display the productivity of the committee as it seeks to bolster the Noel Studio’s online presence through what Yakin and Gencel cite as two of the most popular social media sites—Facebook and Twitter—and the potential for expansion to other social media, illustrating the positive effects of a committee on the Noel Studio’s social media presence.