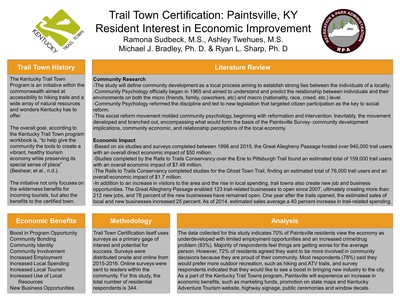 As early as the 1960s (Harnik, 2001), Americans were interested in the idea of implementing trails in towns for economic purposes. After the success of many trail programs, similar projects began to be developed and in the early 2000s, the desire to create trails near communities led to the development of Trail Towns. Kentucky Trail Towns aim to grant communities benefits such as increased tourism and exposure, leading to economic boosts (Trail Town, 2015).

A survey was developed in order to provide necessary information to aid community leadership as they work on their trail town application. This project sought to identify resident knowledge of and attitudes towards current and potential tourism attractions in Paintsville, KY. The survey targets general community views including the community regard of the current economy and perceived need for economic improvements. Surveys were distributed both on location and online from fall 2014 through fall 2015.

What the survey results indicate for Paintsville are that, thus far, resident interest in certification is high. While more data is needed, the results can be passed on the Paintsville City Management and from there, to Kentucky Trail Town organizers who will determine certification.