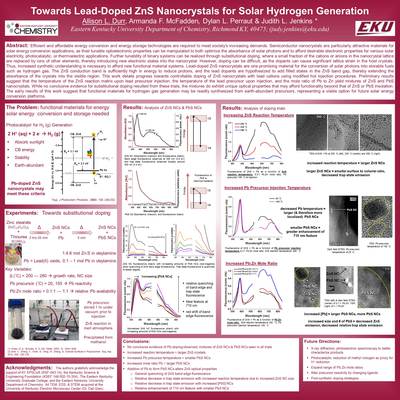 Efficient and affordable energy conversion and energy storage technologies are required to meet society’s increasing demands. Semiconductor nanocrystals are particularly attractive materials for solar energy conversion applications, as their tunable optoelectronic properties can be manipulated to both optimize the absorbance of solar photons and to afford desirable electronic properties for various solar electricity, photocatalytic, or thermoelectric applications. Further tunability of binary systems can be realized through substitutional doping, where a small fraction of the cations or anions in the nanocrystal lattice are replaced by ions of other elements, thereby introducing new electronic states into the nanocrystal. However, doping can be difficult, as the dopants can cause significant lattice strain in the host crystals. Thus, increased synthetic understanding is necessary to afford new functional material systems. Lead-doped ZnS nanocrystals are one promising material for the conversion of solar photons into storable fuels such as hydrogen gas. The ZnS conduction band is sufficiently high in energy to reduce protons, and the lead dopants are hypothesized to add filled states in the ZnS band gap, thereby extending the absorbance of the crystals into the visible region. This work details progress towards controllable doping of ZnS nanocrystals with lead cations using modified hot injection procedures. Preliminary results suggest that the temperature of the ZnS reaction matrix upon lead precursor injection, the temperature of the lead precursor upon injection, and the mole ratio of Pb to Zn yield mixtures of ZnS and PbS nanocrystals. While no conclusive evidence for substitutional doping resulted from these trials, the mixtures do exhibit unique optical properties that may afford functionality beyond that of ZnS or PbS insolation. The early results of this work suggest that functional materials for hydrogen gas generation may be readily synthesized from earth-abundant precursors, representing a viable option for future solar energy conversion platforms.