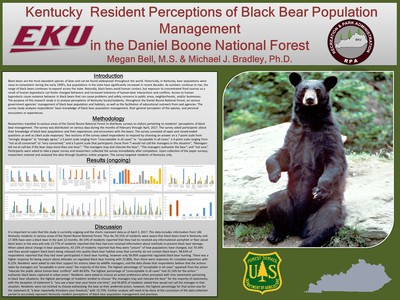 Black bears are the most abundant species of bear and can be found widespread throughout the world. Historically, in Kentucky, bear populations were close to nonexistent during the early 1900’s, but populations in the state have significantly increased in recent decades. As numbers continue to rise, the range of black bears continues to expand across the state. Naturally, black bears avoid human contact, but exposure to concentrated food sources as a result of human byproducts can foster changed behaviors and increased tolerance of human-bear interactions and conflicts. Access to human byproducts cause nuisance behavior in black bears that can cause problems and safety concerns in public areas, neighborhoods, and/or businesses.

The purpose of this research study is to analyze perceptions of Kentucky locals/residents, throughout the Daniel Boone National Forest, on various government agencies’ management of black bear population and habitats, as well as the facilitation of educational outreach from said agencies. The survey study analyzes respondents’ basic knowledge of black bear population management, their general perception of the species, and personal encounters or experiences.