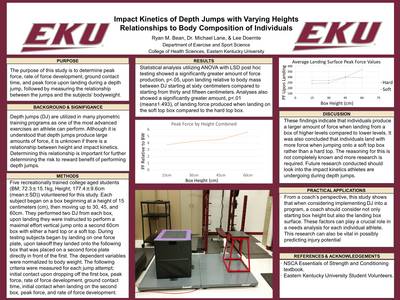 Depth jumps are utilized in many plyometric training programs as one of the highest intensity exercises an athlete can perform. However, there is limited knowledge on the amount of force an athlete produces upon landing and takeoff during a depth jump. This can be a crucial aspect of the risk to reward benefit of this exercise when considering adding these into any training program. Purpose; to determine peak force, rate of force development, ground contact time, and peak force upon landing during a depth jump (DJ). Additionally measuring the relationship between the jump and the subjects’ bodyweight, and how landing surface hardness effects landing forces. Methods; Five recreationally trained college aged students (BM; 72.3±15.1kg, Height; 177.4±9.6cm) volunteered for this study. Each subject began on a box beginning at a height of 15 centimeters, then moving up to 30, 45, and 60 centimeters. They performed two DJ from each box, upon landing they were instructed to perform a maximal effort vertical jump onto a second 60 centimeter box with either a hard top or a soft top. During testing subjects began by landing on one force plate, upon takeoff they landed onto the following box that was placed on a second force plate directly in front of the first. The dependent variables were normalized to body weight. The following criteria were measured for each jump attempt; initial contact upon dropping off the first box, peak force, rate of force development, ground contact time, initial contact when landing on the second box, peak force, and rate of force development. Results; statistical analysis utilizing ANOVA with LSD post hoc testing showed a significantly greater amount of force production, p<.05, upon landing relative to body mass between DJ starting at sixty centimeters compared to starting from thirty and fifteen centimeters. Analyses also showed a significantly greater amount, p<.01 (mean±1.493), of landing force produced when landing on the soft top box compared to the hard top box. Discussion; These findings indicate that individuals produce a larger amount of force when landing from a box of higher levels compared to lower levels. It was also concluded that individuals land with more force when jumping onto a soft top box rather than a hard top. The reasoning for this is not completely known and more research is required. Practical Applications; From a coach’s perspective, this study shows that when considering implementing DJ into a program, a coach should consider not only starting box height but also the landing box surface. These factors can play a crucial role in a needs analysis for each individual athlete.