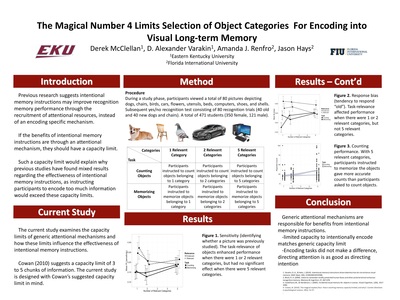 Previous research by Varakin & Hale (2014) suggests that intentional encoding instructions improve recognition memory tests through generic-attentional mechanisms rather than encoding specific mechanisms. Attention is limited in capacity. If these benefits are derived from an attentional mechanism, they should also have a similar capacity limit. The goal of this project was to examine whether such a capacity hinders these benefits. During the first phase, participants (N = 471) were shown a series of objects belonging to different categories (e.g. birds, chairs, dogs). Each object was displayed one at a time at the center of a computer screen. Participants were given one of two tasks. Participants were either instructed to either keep a running count of the number of objects belonging to specific categories or memorize the number of objects belonging to specific categories. Participants were instructed to count or memorize objects belonging to 1, 2, or 5 categories. Participants then completed a recognition task, where they were presented with objects from two categories, one that was relevant, and one that was irrelevant. The findings revealed that task (memorizing vs. counting) was not significant. The interaction between the number of relevant categories and object relevance was significant (p Behavioral and Brain Sciences).