Cell Phones and the Family Friend or Foe 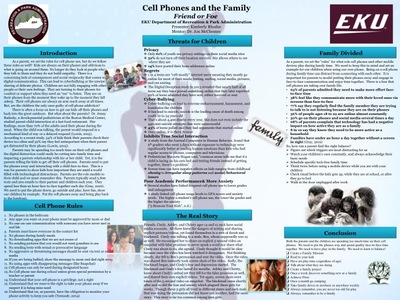 As a parent, we set the rules for cell phone use, but do we follow these rules as well? Kids are always on their phones and oblivious to what is going on around them. No longer do they look at people when they talk to them and they do not build empathy. There is a concerning lack of consequences and social reciprocity that comes with digital communication. This can lead to cyberbullying or the unwise sharing of delicate photos. Children are not fully engaging with other people or their own feelings. They are turning to their phones for comfort or support when they need an “ear” to listen. They are on their phones from the moment they wake up to the moment they fall asleep. Their cell phones are always an arms reach away at all times. But, are the children the only ones guilty of cell phone addiction?

There is often a focus on how to get our kids off their phones and back into the great outdoors. But what about the parents? Dr. Jenny Radesky, a developmental pediatrician at the Boston Medical Center, studied parent-child interaction at a fast food restaurant. Her findings, more than 70% of the adults used their phone during the meal. When the child was talking, the parent would respond in a mechanical kind of way or a delayed respond (Lowin, 2015). According to a recent study, 54% of kids think their parents check their device too often and 32% say they feel unimportant when their parent get distracted by their phone (Lowin, 2015).

Parents may be spending too much time on their cell phones and the digital distraction could easily be cutting into family time and impacting a parents relationship with his or her child. Yet, it is the parents telling the kids to get off their cell phones. Parents need to put the phones away and interacting with a child face-to-face. This is a way for parents to show kids how important they are amid a world filled with technological distractions. Parents are the role models for their child and we must remember this. Parents typically send 5,800 texts and 260 emails to their partner and children each year. They spend less than an hour face-to-face together each day (Gray, 2016). We need to put the phone down, go outside and play, have fun, show our children by example. Put the cell phones away and bring play back to the forefront.