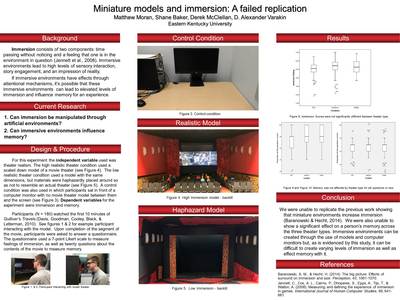 Previous research suggests viewing movies in realistic miniature theaters can increase feelings of immersion relative to viewing movies on isolated monitors (Baranowski & Hecht, 2014, Perception). The current experiment tested whether realistic miniatures also affect memory for the viewed movie. Moran et al. (2017, VSS) found realistic miniatures increased immersion relative to unrealistic miniatures, but memory was unaffected. The questions used to assess memory were easy, raising the possibility of a ceiling effect. The current experiment was similar to Moran er al. (2017). Participants (N = 180) watched the first 11 minutes of Gulliver's Travels (2010) in one of 3 conditions. In the realistic condition, the movie was viewed through a realistic model movie theater. In the haphazard condition, it was viewed through a model with the same dimensions, but materials were placed around the walls and floor haphazardly. In the no model condition, participants watched it on a computer monitor. At the end of the clip, immersion was measured using Baranowski & Hecht's questionnaire and memory was assessed with a 20 question multiple-choice test. Ten of the memory questions were from Moran et al's experiment, and ten new, more difficult, questions were added. Replicating previous work, memory was not affected by differing viewing conditions, though the new questions resulted in lower performance (66% vs. 90%, p < .05). Immersion scores did not significantly differ across the three conditions, failing to replicate. As our method was not identical to Baranowski & Hecht's, it's not clear why our findings differ from theirs.