An Examination of the Leadership Styles of Women in Recreation Services 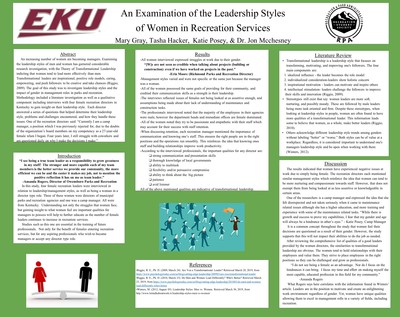 An increasing number of women are becoming managers. Examining the leadership styles of men and women has garnered considerable research investigation, with the Theory of Transformational Leadership indicting that women tend to lead more effectively than men. Transformational leaders are inspirational, positive role models, caring, empowering, and push followers to be creative and take chances (Riggio, 2009). The goal of this study was to investigate leadership styles and the impact of gender in management roles in parks and recreation. Methodology included a literature investigation as well as a qualitative component including interviews with four female recreation directors in Kentucky to gain insight on their leadership style. Each director answered a series of questions that helped determine their leadership style, problems and challenges encountered, and how they handle these issues. One of the recreation directors said: “Currently I am a camp manager, a position which I was previously rejected for, due to the doubts of the organization’s board members on my competency as a 27-year-old female when I began. Four years later, I still struggle with coworkers and am questioned daily on why I make the decisions I make.”