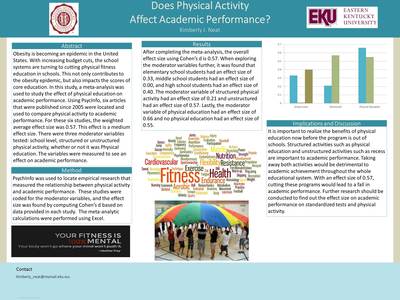 Obesity is becoming an epidemic in the United States. With increasing budget cuts, the school systems are turning to cutting physical fitness education in schools. This not only contributes to the obesity epidemic, but also impacts the scores of core education. In this study, a meta-analysis was used to study the effect of physical education on academic performance. Using PsycInfo, six articles that were published since 2005 were located and used to compare physical activity to academic performance. For these six studies, the weighted average effect size was 0.57. This effect is a medium effect size. There were three moderator variables tested: school level, structured or unstructured physical activity, whether or not it was Physical education. The variables were measured to see an effect on academic performance.