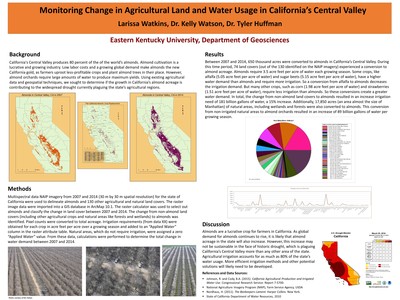 California’s Central Valley produces 80 percent of the world’s almonds. Almond cultivation is on the rise due to growing demand and low labor costs. As a result, almond acreage in the state increased by 50 percent between 1995 and 2015. The economic boom in almonds has led farmers to uproot less economically lucrative crops and plant almond trees in their place. However, almond orchards require large amounts of water and the state of California is currently experiencing a drought crisis. To better understand the role that expanding almond acreage may be playing in the drought crisis, I used geospatial techniques to quantify the spread of almond acreage and the conversion of other land uses (such as cotton, alfalfa, and pasture) to almond orchards. Using high-resolution NAIP imagery, agricultural land use maps, and crop water usage data, I then calculated the water usage rates of the original land uses in ArcMap GIS software and compared these numbers to the water usage rates of current almond acreage. My results show the counties experiencing the most growth in almond acreage, the conversion rate of agricultural land uses, and the contribution of almonds to the water crisis in California.