Sousveillance in the age of the Smartphone: Policing the Police 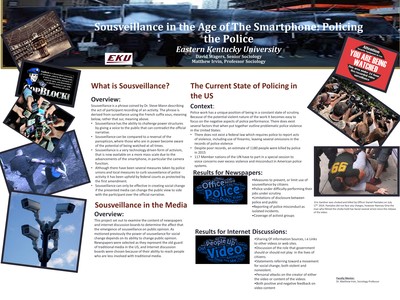 As more forms of personal recording devices become available to the general public in the form of low cost cell phones or other electronic devices, participant involved recording, also known as sousveilance becomes more common. Sousveilance, a term coined by Steve Mann (Mann, 2003) is the term for " top down" monitoring of those in authority by means of video cameras, made easily accessible with the advent of smart phone technology This term, from the French " sous' or" below' is in contrast to the term surveillance (sur= above). These emerging technologies provide the possibility for a fundamental shift in the balance of power in terms of observation of behavior by the less powerful of everyday exercises of authority by those with institutional power. These technologies allow participants to provide an alternative narrative in situations of misconduct by public servants (such as police) and other officials. The strength of the use of sousveilance as a tool for social change depends on the balance of power between the strength of the voice of the official narrative vs. the strength of the voice of the recorded medium. My analysis is a content analysis based assessment of the degree of differences in official (newspaper and televised media accounts) vs. grassroots (YouTube video accounts and comments) depictions of police incidences captured by bystanders on smart phones and other emergent hand held electronic devices